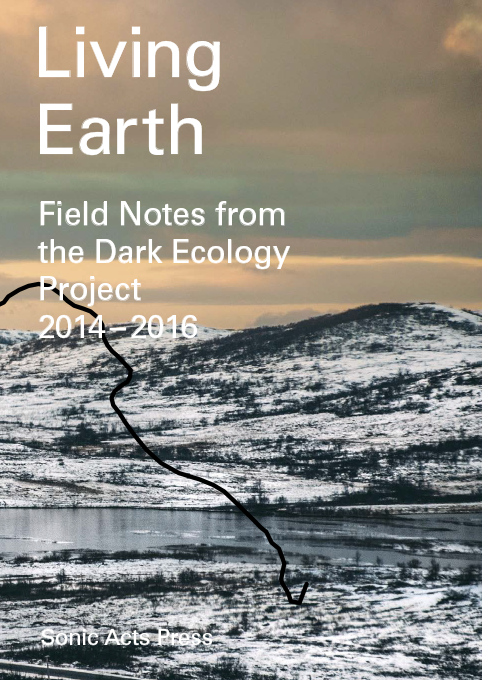 Blurb
Living Earth is a new book filled with ideas, conversations, lectures, and documentation relating to commissioned installations, soundwalks, concerts and performances made for and during the Dark Ecology project. This three-year project, a collaboration between Sonic Acts and the Norwegian curator Hilde Methi, was held from 2014 to 2016 in different places in Norway and Russia and included three curated ‘Journeys’. Living Earth is a recreation of these research trips to the Barents Region, from Kirkenes and Svanvik in Norway to Nikel, Zapolyarny and Murmansk in Russia.

The project was inspired by Timothy Morton’s concept of ‘dark ecology’ and his philosophy of ‘ecology without Nature’. Morton offers a radical criticism of the modernist way of thinking about nature as something outside of us, and instead proposes an interconnected ‘mesh’ of all living and non-living objects. He ruminates on this idea in his essay for Living Earth entitled ‘What Is Dark Ecology’, stating at the outset that ecological awareness is ‘weird weirdness’.

"Dark ecology is about how we get to exit from toxic modernity. It’s been very moving for me to watch the Sonic Acts artists working with a concept I’ve been shaping for a while. They have explored the Arctic realm with the greatest aesthetic skill, a skill that by no means excludes the political." – Timothy Morton

Living Earth is a 256-page trip with artists, thinkers, curators and other Dark Ecology participants into the dark space of rethinking nature and art, and it also contributes to the contemporary Anthropocene debate. The motivations behind the project and its impact are discussed in the interview with the curatorial team titled ‘Outside the Comfort Zone’, which opens the book. Besides Timothy Morton’s long essay 'Dark Ecology' the book contains contributions by Susan Schuppli (‘Dirty Pictures’), and Berit Kristofferson (‘The Workable Arctic of Ice and Oil’), which examine the consequences of the Anthropocene. There is an interview with Heather Davis (‘Queer Kinship’), and in her essay about Margrethe Pettersen’s soundwalk (Living Land – Below as Above), Britt Kramvig builds on the notion of ‘anthropo-not-seen’. Tatjana Gorbachewskaja and Katya Larina discuss their research into the interaction between the Arctic environment and the architecture of the Russian mining town Nikel (‘Nikel – The City as a Material’). Graham Harman embarks on an interesting rethinking of Jakob von Uexküll’s influential book A Foray Into the World of Animals and Humans and its notion of environment (‘Magic Uexküll’).

Living Earth is a catalogue too, as it documents and presents in different formats the commissioned works created for Dark Ecology. There are works by HC Gilje (Barents – Mare Incognitum; The Crossing; Mikro with Justin Bennett), Joris Strijbos (‘Machine Synaesthetics’, an interview about his work IsoScope), Espen Sommer Eide (Material Vision – Silent Reading; ‘A Vertical Perspective’ – a text about his collaboration with Signe Lidén on Altitude and History). Some artists were already presented in more depth in a previous Sonic Acts book, The Geologic Imagination (2015), but are present in Living Earth as well: Raviv Ganchrow (Long Wave Synthesis), Karl Lemieux and BJ Nilsen (unearthed), Marijn de Jong (with a photo essay Grey Zone) and Femke Herregraven (Staring into the Ice).

“Participating in the Dark Ecology journey was an extraordinary opportunity to witness the dark matters of environmental change firsthand through direct contact with the landscapes in which we travelled. This book reflects upon these encounters, entangling our proximate and local experiences with the global processes of accelerated climate change.” – Susan Schuppli

As a catalogue of texts and visual essays from the Dark Ecology project, Living Earth not only engages in a vibrant conversation with the previous Sonic Acts book The Geologic Imagination, but is also an introduction to the ongoing contemporary debates about the nature, ecology, art and ‘mesh’ that we live in.

Co-funded by the Creative Europe Programme of the European Union.